The great white shark is a threatened species and it is listed as vulnerable. It is in the Lamnidae family with the genus Carcharodon, species Carcharodon Carcharias. Carcharodon comes from Greek words which means sharp or jagged tooth.

The great white shark is also known as White Pointer, Great White and White Shark. This species of large mackerel shark can be found in all the major oceans. Great whites average at 3.5 meters but can grow up to 6 meters. Males tend to be smaller than females. The lifespan of great white sharks is estimated at 70 years. Females take up to 33 years before they are ready to reproduce and males take 26 years to reach sexual maturity. These sharks can swim to a depth of 1200 meters and reach a speed of over 56 km/h. 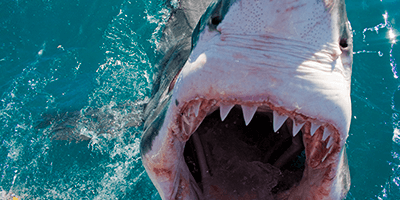 The only known predator to the great white shark is the occasional killer whale. The great white is a primary apex predator of marine mammals. Prey includes seabirds, seals and fish. It is also the shark species with the most recorded human bite incidents.

The Peter Benchley novel and the movie Jaws has gripped the human race in fear of the great white shark. Jaws depict this shark as a ferocious man-eater. The truth is that humans are not the preferred food of this shark. It is still however responsible for the largest number of unprovoked attacks and fatalities on humans.