The Great White Shark is known for being a true predator. Shaking its head from side to side so the rows of serrated teeth can act like a saw, chunks of the flesh is ripped from the prey. With one bite, the Great White can consume about 9.1 – 13.6 kg (20 – 30 lb) of flesh at a time. An individual shark consumes approximately 11 tons of food in one year. In comparison, an average adult human consumes about half a ton in one year. Great White Sharks will prey upon fish, sea turtles, dolphins, porpoises, whales, tuna, rays, seals, sea lions, sea otters, seabirds and even other sharks. Chunks of the oceanic sunfish have also been found in the stomachs of Great White Sharks. It is well known that they even consume items that they are unable to digest. Preference is given to very fatty, energy-rich meals, making seals and sea lions the perfect prey. A seal could easily be up to 50 % fat.

An experiment was done by shark expert Peter Klimley, trolling three types of bait on a line. Carcasses of a pig, a seal, and a sheep were used. All three baits were attacked, but the sheep carcass was rejected. Juvenile Great White Sharks prey predominantly on fish because their jaws are not yet strong enough to withstand the forces required to attack larger prey. Once they reach a length of about 3 m (9.8 ft), their jaw cartilage mineralizes enough to withstand the impact of biting into larger marine mammals, such as seals and sea lions.

Adult male elephant seals are generally larger than sharks, so the seal is first immobilized, by the shark attacking the rear end of the seal first, and then waiting for the seal to bleed to death, before tearing chunks of flesh from it. Juvenile elephant seals are more commonly eaten though. To avoid being detected by their echolocation, dolphins, and porpoises are attacked from below, behind or above. Prey such as harbour seals is taken to the bottom of the ocean. Once the seal stops struggling, it is eaten. Sea lions are struck mid-body from below, dragged and then consumed.

Great White Sharks have also been observed attacking and killing smaller species of whales, such as the Stejneger’s Beaked Whale and Cuvier’s Beaked Whale. When the shark prey’s upon a sea turtle, the turtle is rendered immobile, by the shark biting through the carapace around one of the turtle’s flippers, making for easy feeding. 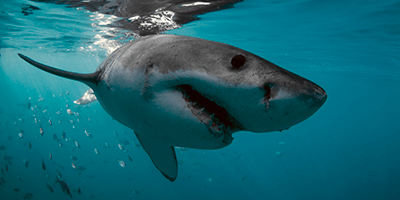 In South Africa, off Seal Island in False Bay, brown fur seals are ambushed at high speed from below, hitting the seal mid-body, at the surface. The sharks reach such high speeds, that they sometimes leave the water completely. It is estimated that the peak burst speed must be higher than 40 km/h (25 mph). Within 2 hours of sunrise is when the most attacks occur. The sharks have a 55 % success rate in the first two hours, dropping to 40 % later in the morning. After that, hunting stops.

Whale blubber makes up for an important part of the Great White’s diet. Whale carcasses provide plenty of blubber for the sharks. Whales tend to die in very remote areas, making the observation of the feed very rare. Between 2000 and 2010, four whale carcasses were observed in False Bay, attracting Great White Sharks.

Using chemical and odour detection, the sharks found the carcass every time. Ocular rotation is not used by the sharks when feeding on dead prey, only when hunting live prey. Initially, the sharks feed first on the fluke of the whale. They then proceed to swim slowly around the carcass, testing the flesh until they find an area rich in blubber. Chunks of blubber are then torn off and consumed.

One shark was observed accidentally biting the head of the shark next to it, leaving two teeth embedded in its head. Both sharks were unperturbed and just carried on feeding. The sharks will feed for several hours, eventually no longer going to the surface, and looking very lethargic. The sharks were observed, apparently no longer have the strength to tear off any more chunks, instead just bumping into the carcass and then slowly sink. It is estimated that 30 kg (66 lb) of whale blubber could easily feed a large Great White Shark for 1.5 months.