The Copper or Bronze Whaler Shark

The Copper Shark, or Bronze Whaler Shark, prefers temperate waters, rather than tropical, in temperatures above 12 degrees Celsius (54 degrees Fahrenheit). These sharks can be found from the surf-zone to beyond continental shelves in the open ocean. They are recorded diving to a depth of 100m (330 ft). It is common for Copper Sharks to enter shallow waters, including bays and harbours. 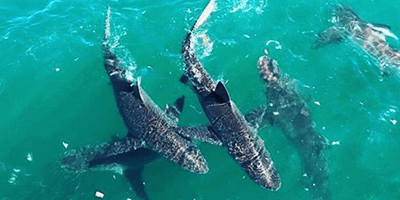 Where do copper sharks roam?

Having a tolerance for low salinity, they have been reported being seen at the lower reaches of large rivers. Parts of the world where they are common are Australia, New Zealand, Argentina, and South Africa. Seasonal migration occurs due to temperature changes, prey availability and reproductive events. Individuals have been recorded migrating for distances of 1320 km (820 mi).

What do Copper Sharks eat?

The diet of these sharks consists mainly of bony fish, cuttlefish, skates, stingrays, squid, sardines and even Dogfish Sharks. The annual sardine run that occurs along the east coast of South Africa attracts a lot of predators, with Copper Sharks being the most numerous of all the sharks that prey on the sardines. The sardines comprise 69 – 95 % of these specific Copper Shark’s diet. Seemingly cooperative hunting has been observed, comprising of large numbers of Copper Sharks in a group. Schools of prey are herded into a tight ball, with the sharks taking turns to rush into the ball of fish, mouth agape. A “wing” formation is adopted by the group of sharks, in the case of larger prey and Tuna, forcing the prey closer together, with each shark targeting a specific, single prey. 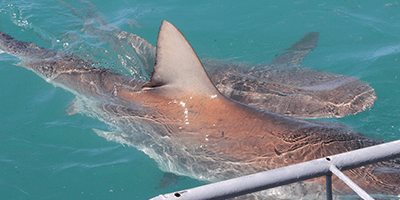 The size of the Copper Shark

The Copper Shark can reach a length of 3.3 m (11 ft) and a weight of 305 kg (672 lb). Females and males are apart for most of the year, only coming together to mate. They grow extremely slow, with males reaching maturity at ages 13 – 19, and females reaching maturity at ages 19 – 20. Gestation takes anything from 12 – 21 months. The female gets bitten by the male, as a prelude to mating. Mating takes place from October to December, in the Southern Hemisphere, with both sexes having migrated to offshore waters. Developing embryos are mainly nourished through a placental connection formed from the depleted yolk sac. Live pups are born every other year in litters of 7 – 24, the average being 15 – 16. Coastal nursery areas are the preferred areas for females to give birth. These nurseries supply an abundance of food for the pups and reduce the likelihood of predation by larger predators. The male lifespan is 30 years and the female 25 years.

These sharks are listed as Near Threatened, due to their slow growth and reproductive rates. Commercial and recreational fishing also plays a part, with the shark’s meat being highly valued. Attacks on humans are very rare, with the Copper Sharks ranked 10th on the list of unprovoked attacks by sharks.

An absolutely amazing diving experience can be had with these magnificent sharks, by cage diving in Gansbaai, just more than an hour’s drive from Cape Town.