The Tiger shark, scientific name Galeocerdo Cuvier, has skin that can range from blue to light green, with a white or light yellow underbelly. Dark spots and stripes are most visible in young sharks. The spots and stripes fade as the shark matures. For quick turns to one side, the head is slightly wedge-shaped. To provide lift while swimming, Tiger sharks have long fins. The dorsal fins are distinctively close to the tail. A long upper tail can provide a burst of speed when necessary. Despite their sluggish looks, they are very strong swimmers. The high back and dorsal fin, allow the shark to spin quickly on its axis. Tiger shark teeth are easily identified by the tip of the tooth that points sideways. Electroreceptors are present in small pits on the snout, enabling electric field detection. Weak electrical impulses generated by prey, assist with the hunt. With no moveable upper or lower eyelids, they do have a clear membrane that can cover the eye. The Tiger shark is considered sacred by some native Hawaiians, believing that the shark’s eyeballs have special powers of visual perception. Location and eating habits of the Tiger Sharks.

Tiger sharks can be found in tropical and subtropical waters around the world, often near to the coast. They stay closer to the equator in colder months and use warmer currents as guidance. Prey can be pursued into shallow waters, but they tend to stay in deep waters that line reefs. On average, the Tiger shark is recorded at around depths of 350 meters (1100 ft), although they have been recorded at a depth of near 900 meters (3000 ft). They are uncommonly seen in shallow waters.

As an apex predator, the Tiger shark will eat almost anything. At a younger age, they feed mostly on molluscs, smaller fish and certain jellyfish. There is a considerable expansion in their food selection when they reach sexual maturity. They will now prey on dolphins, dugongs, seals and the larger sea turtles. Even other large sharks, including other Tiger sharks, are preyed upon. They have been documented feeding alongside Great White sharks, on ailing, injured or dead whales. Because they are aggressive and indiscriminate in their feeding style, inedible objects often get eaten too, including vehicle license plates and tin cans. 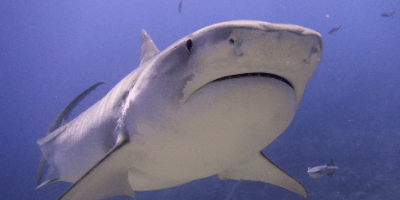 Tiger shark status is Near Threatened, due to human fishing and “finning”. Continued fishing will certainly make the numbers decline in the future. While there are very few nutrients present in shark fins, there is a high content of vitamin A present in the liver, which is used to produce vitamin oils. The distinct skin of the Tiger shark is another attraction to big game fishermen. They are reportedly responsible for a large share of fatal bite incidents on humans, ranking second only to the Great White shark. They are thus considered one of the most dangerous sharks to humans. In order to protect the tourism industry, more than 4600 Tiger sharks were culled from 1959 to 2000. This proved ineffective in decreasing interactions between humans and Tiger sharks.

Unforgettable diving experience with the Tiger sharks can be done off the coast of Durban, in Kwazulu Natal. Bait is set at a depth of 15 – 17 meters on the seabed, so the sharks can be viewed as they feed on the bait. Viewing can be done from the safety of the boat, by snorkelling, or diving down to a depth of about 8 meters. Should the sharks disappear very quickly, another location is chosen. Chumming is done upon arriving at the dive site, and the divemaster will assess the arriving Tiger sharks, to make sure they are not acting aggressively. Thereafter divers may enter the water.